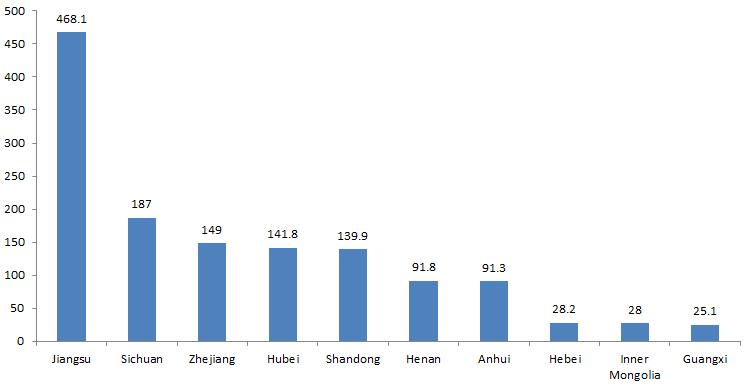 In the first three quarters of 2019, the top 10 chemical pesticide technical production provinces were Jiangsu, Sichuan, Zhejiang, Hubei, Shandong, Henan, Anhui, Hebei, Inner Mongolia and Guangxi.
Jiangsu Province is a major chemical production province, especially for pesticides, dyestuffs and petrochemicals. Jiangsu has the largest number of chemical enterprises in China, with more than 4,500 chemical enterprises of a certain business scale.
The chemical pesticide industry belongs to the fine chemical industry, and China is the largest pesticide producing country in the world. In recent years, after being affected by the policy of zero growth pesticide use, the strict environmental compliance requirement, resettlement of chemical works in industrial parks and the Yangtze riverbank regulation program, the technical output of China’s pesticides started to decline from 2017. According to the current production trend this year, pesticide production is likely to decline for three consecutive years.

Get products news, tip and solutions to your problems from our company.